Is it a future where all commerce shifts online

When Amazon opens fulfilment centres in a new country, many commenters predict an apocalypse for all physical retailers and envision a future where all commerce shifts online. We think the picture is more nuanced.

I recently visited the United States to attend RetailX, one of the largest retail conferences in the world. While there, I witnessed numerous examples of the retail bifurcation with low-end and high-end retailers performing well, while those retailers in the middle are struggling, facing apocalypse.

The structural shift to online shopping is a major headwind to retailers occupying the middle. We have all been in these retailers; they typically offer widely available products and use promotions to drive foot traffic, which is no longer effective with price transparency online shopping delivers. They might be in a mall, on a high street or a department store. Typically, these retailers are overpriced, indifferent and uninspiring. An example in the US is bankrupt department store Sears, which was once the largest retailer in the US. 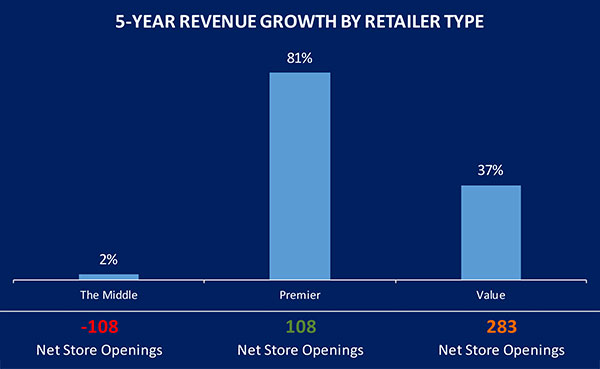 Portfolio holding, Adidas is an example of premium retailer who has used its physical retail stores to provide experience and deepen the emotional bond the brand has with its customers.

Historically the company sold its sportswear through the wholesale channel to many retailers we would now describe as occupying the middle. Adidas has increasingly been opening flagship stores as part of its direct to customer selling strategy along with ramping up its online presence. Importantly, Adidas stores work seamlessly with the company's e-commerce proposition.

As the customer enters, the company’s 45,000 square foot flagship store in New York, they walk through a sports stadium tunnel, similar to what athletes walk through before games thereby creating an emotional bond. Once in the store, customers can have the experience of designing their own shoe. There is a running track on the second floor or nets with soccer balls on the bottom floor to test both running shoes and football boots. Lastly, the store has bleachers where you can sit and watch sport while family members or friends shop. The store has moved past a place to buy sneakers into a destination.

At the other end of the spectrum, we have had success owning value-oriented retailers, Dollar General and Dollar Tree. The dollar stores continue to take share from grocers and drug stores who have to price items at a 20% and 40% premium respectively due to a higher cost base. Simultaneously, with a combined 30,000 stores across the US, dollar stores offer greater convenience with 95% of stores within 5 miles of US households. For the growing number of US households earning less than $40,000 per year, these stores create an attractive value proposition.

We are of the view that indifferent retailers occupying the middle are facing an apocalypse, but we are also finding opportunities at both the low and high end of retail. The companies that are creating stories, experiences and forming emotional bonds with their customers will thrive, while value retailers will grow strongly, delivering a price and convenience proposition to low-income households.