What should investors expect from the next decade in financial markets?

The next decade in financial markets

What should investors expect?

Judging by the newspaper headlines the last decade was a fear-filled one - but investors prospered anyway. Can investors expect the good times to continue in the 2020s? Or will the chickens finally come home to roost?

Working for a bank in London I can remember the start of the last decade vividly. Outside our building there were demonstrators protesting about the damage banks had done to the global economy (quite rightly), and inside the building staff were wondering if they would still have a job next week (many didn’t).

The decade as a whole was plagued with worries, as you can see in the graphic below. It shows the biggest concern of global fund managers each month since 2011. The list started with the sovereign debt crisis in Europe (remember that the “PIGS” (Portugal, Italy, Greece and Spain) were all going to default on their debt and take the global economy with them?). Then there was the China hard landing, then rising populism (Trump & Brexit) were going to derail markets, then quantitative tightening and the trade war would finish us off.

But despite all of these fears, the 2010s somehow ended up being a great decade for investors. The US share market was up 256% (or 13% per annum). Very uncannily, the New Zealand market was also up 256%. Even investors in beleaguered Europe gained 112% (or 8% per annum). 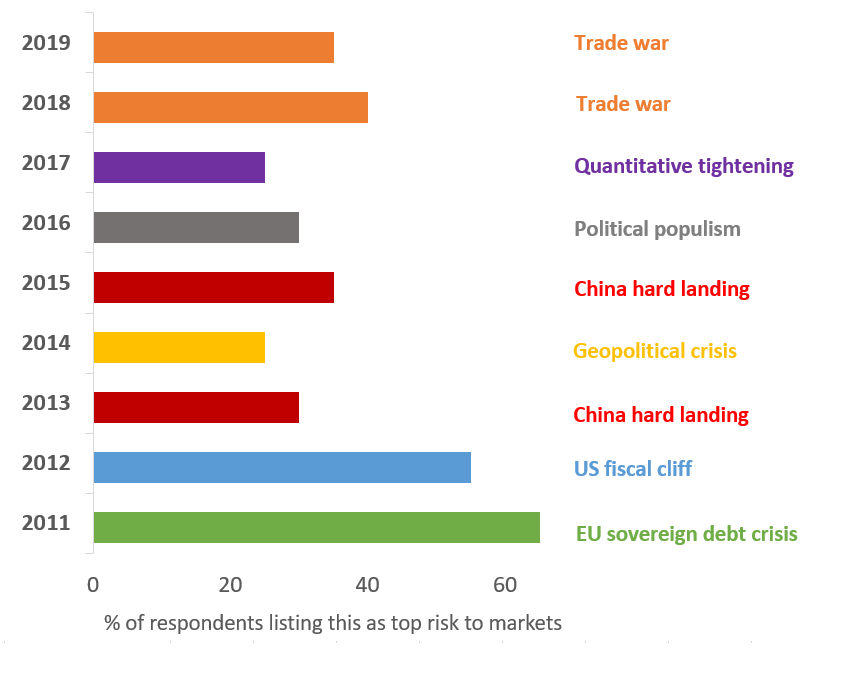 So why the strong market performance despite all of the issues we have been facing?

The reality is that there is a similar list of concerns every decade. In the decade prior there was a US recession, the 9/11 terror attacks, SARS, the sub-prime crisis and the collapse of Lehman Brothers. Newspapers tend to report on negative news and events more than positive developments. This is not necessarily cynical, it is just that bad news and risks always seem more relevant and time pressing. General societal improvements and good news tends to develop slowly over time. Medical breakthroughs improve life expectancy, economic growth reduces poverty, and technology improves our quality of life. These positive developments are not noticed in any given year, but they have a very dramatic impact over a few decades.

From an investment perspective, the potential collapse of the Greek economy is dramatic and its impact would be sudden. The good news for investors over the last decade was also far less dramatic and gradual:

-          On top of this, most companies continued to paying steady and increasing dividends to investors

These points don’t make interesting headlines, but over 10 years these seemingly boring facts had a really big impact on investors’ wealth. In the US share market it resulted in investors more than tripling their money – if they were patient and unperturbed by the constant barrage of negative headlines.

Comparing the 2010s to prior decades

-          Returns for each decade are almost always positive

The chart on the right simply shows the cumulative returns for each decade. There were two decades where you didn’t make any money, but in the other 10 decades you made a return of between 56% and 466%. 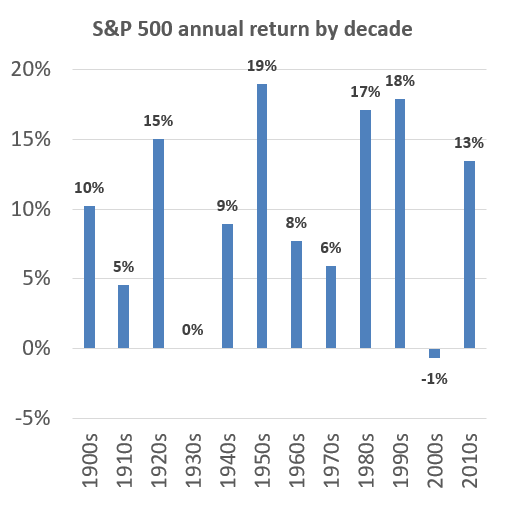 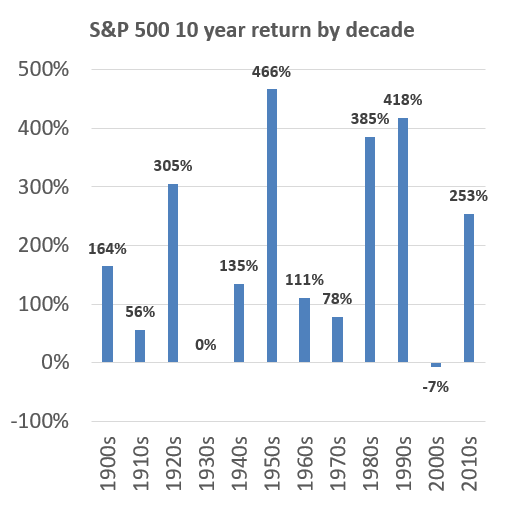 So what can we conclude from this? And what is the outlook for the 2020s?

Firstly, investors in the share market tend to do quite nicely over the long term. Secondly, after a decade of high returns we shouldn’t expect above average returns for the next decade. Investors need to make sure they have realistic expectations (lower returns), but there is no reason for a long-term investor to be overly paranoid.

Over the next decade, an annual return of 5%+ isn’t an unreasonable expectation – which means that over 10 years share market investors could expect a portfolio to gain 50% in value. Not amazing - and the road to that return could be rocky - but certainly better than what a saver will earn in the bank. If a once in a generation shock happened – like the 2000s or 1930s – then you could still expect to end the decade roughly where you started. Which would be disappointing, but hardly disastrous.

Weighing up the good news against the bad, and stick to a plan

No one knows what the dramas of the 2020s will be - but there will be lots of them. Unrest in the Middle East, populist politics, cyber-attacks, trade wars, or China’s debt burden finally becoming unbearable. And no one can predict how these events will impact markets, which tend to grind higher with economic progress and rising corporate profits.

Short-term events and market movements are outside investors’ control. It is more important for investors to focus on what is in their control: Having a financial plan in place; making sure they are saving enough; and making sure they are in the right fund for their stage in life. Over the long term, these factors will have far more impact on an investor’s wealth and standard of living than any emerging market crisis or trade war.

The aim of this article is not to say that we shouldn’t worry about these risks at all – but you need to weigh them up against the positives. There is also plenty of good news to focus on. If you focus solely on the risks, your portfolio may end up worse for wear.