Is inflation finally on the rise?

Is inflation finally on the rise?

Since the 1980s, inflation has been on a downward path from the mid-teen levels seen in the US during the '70s and New Zealand in the '80s. In the wake of the pandemic, with economies in the first innings of opening back up to business, there are growing fears that the inflation trend is about to reverse and head higher. 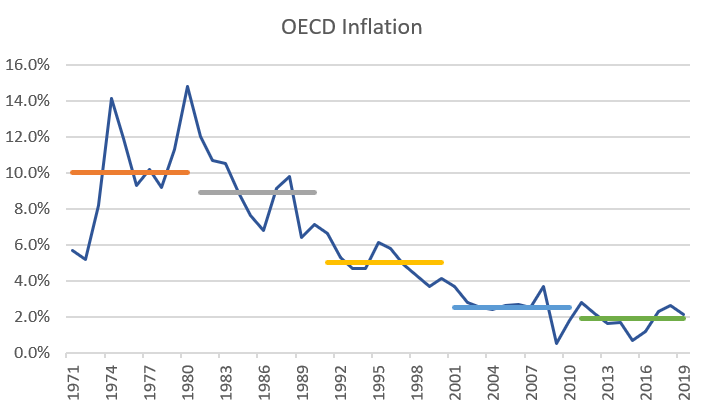 In the United States, the largest economy in the world, stimulus hitting the economy is a whopping US$4.8 trillion. This includes the US$1.9 trillion package recently passed by the freshly elected Democrats, US$900 billion stimulus package Republicans passed in December, and a US$2 trillion pool of US household savings, which have moved considerably higher over the last year as consumer consumption patterns have been hammered by covid-19. This has led to significant pent-up demand.

The second factor driving inflation is rising cost pressures. The price of commodities has been increasing over the last year. For example, copper, which is used as an input in many industries and products, has almost doubled in price. Another example is the rising price of petrol at the pump. Also contributing to cost pressures is appreciation in the Chinese currency, which makes imports more expensive for many countries.

The key question is whether this is transitory or a structural trend higher.

Our core view is that the inflationary pressures will be transitory as the cyclical demand-pull and cost-push inflation drivers give way to structural headwinds, which have pressured inflation over the last three decades. We term these headwinds as the three disinflationary D's - demographics, debt, and disruptive technology.

High levels of debt in the system mean more money is diverted towards servicing debt versus contributing to growth. At some point debt will have to be repaid, thereby suppressing future growth and therefore inflation.

The last disinflationary D is disruptive technology. Moore's Law suggests that we can expect our computers' speed and capability to increase every couple of years, and we will pay less for them. This is having a disinflationary impact on supply chains across most industries.

What does this mean for our portfolio?

Our aim is to create all-weather portfolios. This means not just investing in companies that will do well if our' core view' of a low inflationary environment plays out, but also considering if other scenarios, i.e., inflation materialise. This is where our focus on investing in companies with substantial competitive advantages comes into play.

Take Mastercard and PayPal as two examples of companies that should perform well in an inflationary and disinflationary environment. Both companies have structural tailwinds underpinning their growth (cash to card and e-commerce growth). And both companies will likely succeed in an inflationary environment given these companies charge fees as a percentage of transaction value, which means their revenue will increase with the price of goods and services bought and sold in the broader economy. Their ability to leverage fixed costs (like servers, IT, and staff costs) with increasing transaction volumes also help them grow profitability faster than volumes.

All considered, having the right mix of companies in a portfolio can help protect long-term investors from some of the impacts of inflation.