Tesla – the next Amazon or the next Enron?

The next Amazon or the next Enron?

The outlook for Tesla

Tesla’s meteoric rise has captured the attention of investor in recent weeks. What is behind the rise and what does Tesla need to deliver for investors to be rewarded? We dig into these issues and some related investment lessons.

Tesla and the Fear of Missing Out (FOMO) 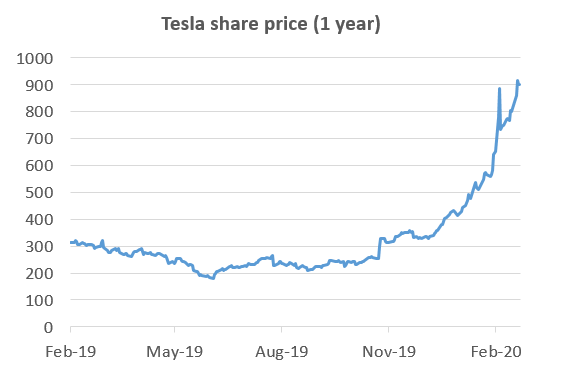 I hadn’t intended to write about Tesla until a local newspaper article caught my eye. The article stated that 10% of all investment holdings on a particular New Zealand investment platform were in Tesla! 10%! That is an extremely high percentage for one company – particularly given the thousands of companies to choose from. Tesla’s share price spike shows that FOMO is alive and well in New Zealand – and has spread beyond our property markets.

Tesla is also an example of a stock with a big divergence in interest between first-time investors and professionals. The first timers have been diving in head first, while professional investors have been running for the hills.

What must Elon Musk deliver for Tesla to be a winner?

The recent share price spike doesn’t mean it can’t go higher, but investors do need to do their maths and understand what they are betting on.

Tesla’s current market valuation of US$165 billion dwarfs Ford at just US$31 billion. It is even larger than Volkswagen’s market valuation of US$90 billion, and Volkswagen not only owns VW, but also Audi, Porsche, Bentley, Lamborghini, Bugatti, Skoda, Ducati, Scania and MAN. Across all of these brands Volkswagen sells over 11 million vehicles a year and turns a EUR14 billion profit (over US$1300 of profit per vehicle). In contrast, Tesla sold only 360,000 vehicles in 2019 and made a loss of $600 million (a loss of US$1700 per vehicle). 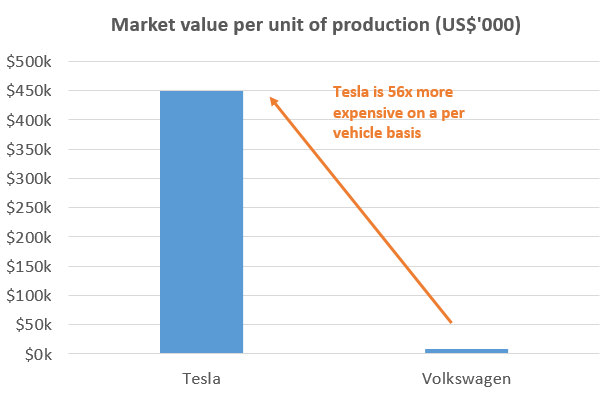 To invest in Tesla you are paying US$450,000 for every car they produce, compared with only US$8,000 if you invest in Volkswagen. Investors paying this price are betting the company will continue to grow extremely rapidly for a long time.

Recent research from investment bank Morgan Stanley estimates that Tesla could produce two million cars in 2030. But even if they deliver this five-fold growth in 10 years, Morgan Stanley estimate Tesla is only worth $500 per share (45% below its current price). In Morgan Stanley’s most optimistic scenario they assume that Tesla produces 4 million vehicles in 2030 (which would be c.30% of global electric vehicle production). If this did eventuate, and if you also ascribed $20 billion of value to the potential for them to create a self-driving car fleet and monetise their solar roof tile businesses, then Morgan Stanley think Tesla could be worth slightly more than the current share price. To achieve that they need to increase their production 10-fold by 2030 (an unprecedented manufacturing feat) while also delivering significantly higher profit margins than Volkswagen. While not impossible, this scenario seems a stretch.

Many professional investors have done similar maths on Tesla and believe the odds on the investment are bad. I hope the first-time investors have also done their maths.

Try to be a hero, end up with zero

The reality is that neither of these scenarios are likely. Can you really make a high conviction case that Tesla will one day sell 10-times its current production at high profit margins? That seems a stretch. But equally, can you make a high conviction case that Tesla will go out of business? Also a stretch given its recent capital raise and return to profitability.  That makes the position of both the bulls and the bears in Tesla questionable. It also makes investing in Tesla pure speculation.

Warren Buffett’s first rule of investing is “don’t lose money”. Tesla is the sort of investment where you can get caught up in the hype and break this rule very quickly – which is why we avoid these speculative situations.