Bitcoin and cryptocurrency can be a polarising topic, and certainly has been an area of debate within the investment community. While we can understand some people wanting to speculate small amounts of money in cryptocurrency, we do not think it has a role in a long-term investment strategy.

Cryptocurrency has come under a bit of fire in recent weeks. First Charlie Munger called Bitcoin “disgusting and contrary to the interests of civilization”, with partner Warren Buffett going even further, calling it “rat poison”. The Bank of England governor says cryptocurrency investors should “be prepared to lose all their money”.

Bitcoin supporters were quickly on internet forums dismissing these as uneducated comments from “boomers” who just don’t get it. But harder to ignore were comments from Elon Musk, a long-time crypto evangelist. While talking up the long-term benefits of cryptocurrency, he also said Dogecoin was a “hustle” and that cryptocurrency “should be considered speculation at this point". His company Tesla subsequently stopped accepting Bitcoin as payment of vehicles, seeing Bitcoin’s value drop nearly 10% in one day.

We tend to agree with everyone above. Cryptocurrency is a tool for speculation rather than part of a diversified investment portfolio. To explain why, it is worth taking a step back and consider the two main reasons to include an investment in a portfolio: it generates an investment return, or it provides some insurance or risk protection. But investors can achieve these outcomes without resorting to volatile cryptocurrencies.

Investment assets should generate a return or yield…

Obviously, an investment portfolio should generate a return. This return comes from some underlying productive asset, like a stock, term deposit or a rental property – where we can assess an intrinsic value based on current and future cash flows.

How do you place a value on Bitcoin? It does not produce earnings or cash flow like a business or rental property (it can be lent out via crypto-exchanges, but this is risky as most loans are made to cryptocurrency speculators, and exchanges can and have failed). Bitcoin is just a token that trades at whatever price people are willing to pay, where this value is based on the faith of the people participating in the cryptocurrency ecosystem. Getting a return relies on the next person wanting to pay a higher price, a classic example of the greater fool theory. 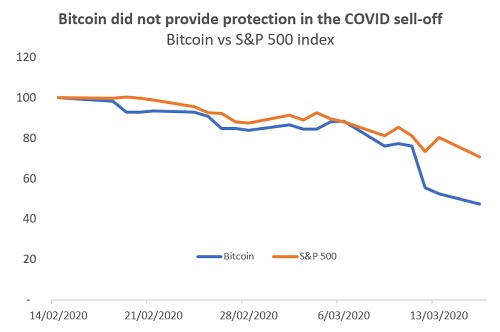 Or provide insurance against market risks.

Just as car insurance protects you from the costs of an unexpected accident, portfolio insurance in the form of cash or bonds protects against market risks, such as a share market correction.

An example here would be cash, which holds its value as markets fall and can then be subsequently invested in the depressed markets. Government bonds may even increase in value when share markets fall, providing a valuable diversification benefit.

Bitcoin has not provided this downside protection in declining markets. In the most recent market selloffs, Bitcoin declined more than the market.

Proponents of Bitcoin talk of its ability to hedge against inflation, a role gold has played in the past. The argument goes that unlike money which can be printed infinitely, there is a finite amount of gold or Bitcoin (which is capped at 21 million tokens). We would counter that while Bitcoin may be finite, cryptocurrencies are not. There are now over 4,000 cryptocurrencies, with no limit to how high this can go. Dogecoin which was started as a joke in 2013 is now ‘worth’ over $50b. Our analysis of historical results shows that Bitcoin returns have limited correlation with changing inflation expectations over the last few years, and certainly no better than more traditional inflation hedges like inflation-linked bonds.

There are also environmental and social concerns – including the level of energy needed to ‘mine’ the coins, and cryptocurrency’s history as a tool for money laundering, funding terrorism, and illicit trade. Elon Musk acknowledged the environmental impact in his decision for Tesla to stop accepting Bitcoin.

That is not to say that the blockchain technology underlying cryptocurrency is not useful. There are potential applications in a range of areas including finance, supply chain and healthcare.

If people are punting on cryptocurrencies, they should not be speculating more than they can afford to lose, and it should not be considered part of a long-term investment strategy.